I haven't had much time to draw in the last 3 days with this workshop, but I did this in my sketchbook on Monday before sleep with a brush pen and watercolor. Again referenced from my "The Agile Rabbit Picture Atlas of Flowers".

And here is a piece of typography me and my 3 team-mates did at the last day of Max Kisman workshop. We had to take photos of objects that look like letters and assemble it into a sentence. If you live in the northern coast of Croatia you might have a chance of understanding it. It has some funky diacritics too.

Rooted in the past

I almost forgot I had a sketchblog (and a sketchbook, for that matter). I must have had the least productive month (or two) in the past year. Now I'm slowly getting out of this apathetic phase. Here's something I did a few weeks ago — an experiment in mixing traditional and digital media, though it's very far from what I intended and I'm not happy with it.

Ballpoint pen sketch, traditional painting (textures), photos, digital painting... I suppose you can recognize which is which.

This was a quick photo-manipulation I did for the back of my business card.

I doubt I'll post more photo manipulation WIP, but since I saved all my progress versions of this one, I'll share the process with you.

First I cut my figure from the original photo which was taken in my bathroom (the only room in the house with proper light). The hair extracting was the biggest problem, as none of the techniques from popular tutorials worked on this photo, due to complex background. I should buy a white cloth for background.

It's obvious brain photo is not really of desired quality...

...so I painted over it. I tried to follow the pattern of the photo beneath, but to add some new details as well (I googled for some references). I also desaturated the body photo.

Added a pair of bat wings — now this was harder than I thought, because I had no idea how it would look in reality — I mean the shoulder blade, and that anatomical stuff. This was the best I could do without making myself look like Quasimodo.
I also arranged some kind of background with paper and canvas textures.

I decided on the fiery background, so I assembled the fire from a few photos, and painted some parts.
I also tried to make a realistic brand (I found a tutorial on this, but some steps were not giving the right results, so I improvised).

I decided on the red hair, so I painted it in a few reddish shades, but added some of the original hair texture so that it doesn't stand out too much from the rest. I added a paper texture on top of everything because I just like textures.
Finished work can be seen here, and here's a few details at 50% size:

Recently I got a proposal to make a cover for a book that SFera, croatian SF & fantasy society, publishes yearly. It was the kind of job I was really happy to do.
After hearing the theme (and probable title of the book) I figured it won't be that easy to think of a proper concept... 13th circle of abyss.
Here's how I did it.

For the first several days I mostly did just thinking and drawing tiny thumbnails in my sketchbook.

I had a general idea: some kind of vertical tunnel, a protagonist who is in great peril, and some mysterious creatures lurking about.
After some more thinking and sketching, I ended up with a person falling down through disappearing stairs.

Of course, this is not the kind of sketch you can send to the editor. So I made a cleaner (not too detailed) sketch, and a roughly colored version.

The sketch was approved, so I met with my friend Maja for a photo shoot. After digging through her closet, we managed to find something that won't stand out too much. I thought there's no need for historical or futuristic styling.
I kept some 15 photos that were usable, but in the end only 2 or 3 were really good.

For a while I thought I would paint the stairs, but it just didn't work. I didn't have any decent photos of my own, so I bought a really good one from iStockphoto.

When I was ready to begin, I set up the file to the specified size, drew the guidelines to help me place key elements correctly, and started working on the actual manipulation.

Some elements of this work were photographic (girl, stairs, wall texture), and others were painted (girl's ponytail, mouth, creatures in the background).
And here's the finished work.

Here are some details at 50% size:

This is a sketchblog featuring my sketches, doodles, studies, work-in-progress, speedpaints, orphaned work, and more. 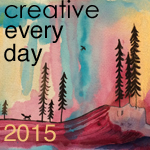